JR is a Las Vegas native, Bonanza High School graduate who now and for the last 20 years has been working exclusively as an actor, writer and musician in Hollywood. He’s been a zillion TV commercials, done gobs of prestigious LA theater, and worked with a who’s who list of celebrity actors and directors. On top of all that, he’s been happily married for 8 years and has a 5 year-old daughter.

I just saw him in a production by his current theater company called The Next Arena which used a bunch of Vonnegut Short stories called Vonnegut U.S.A. It was great. JR has this great vibe to his performances that I love: it’s a sort of presentational aspect, a certain theatricality. It’s as if the characters know they are being watched, even though they remain completely genuine to the moment. And he does it without a trace of irony or self congratulation. Really cool and fun to watch.

DK: I’m flummoxed by the entertainment machine lately. I feel completely lost in the morass of youtube, cable, live streaming, whatever. You and I go way back and we each have a super traditional training background. Are we relevant anymore? Where do folks like us fit in?

JR: I think he/she fits in as one always has in terms of having really useful tools, skills and training to draw from. Fortunately, those things are always positives for the performer and respected and acknowledged by creative types in all facets of the biz. However, this business is extremely hard for someone to break into that’s not-well connected through family or well-positioned friends. That has always been the case, I’m sure… but the amount of people trying to compete and the catch-22 of not being able to get ahead without a powerful agent and not being able to get an agent without big credits… which are nearly impossible to acquire without top-drawer representation… makes it an often frustrating and unforgiving pursuit. It took me about 10 years to get a commercial agent and then another ten to get theatrical representation. I now 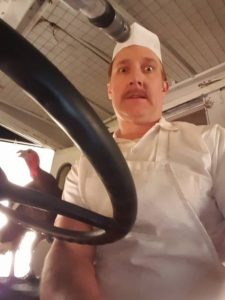 have a manager and an agent. Neither of which are very well-positioned and so I mostly go out for co-starring roles, which are usually just a scene or two and a handful of lines. I also think it takes a certain personality to make big strides in Hollywood. I’ve never been one to do the social scene much, and yet I see friends that do and it works for them. Plus you gotta be ok with about 98% rejection. Seriously. And of course, for many it only takes that one successful gig to propel them onto a path of career stability. But for every one of those I know about a hundred more, like myself, who are and have been continuously hustling and clawing to make a decent living here, one gig at a time.

DK: What are the rules for you in terms of what gigs you will or won’t do? What types of jobs make you happy?

JR: Easily- I’ll do about anything acting-wise for money. Within reason, of course… haven’t done or plan to do any “adult” entertainment and I have a few deal-breaker positions with certain companies that I wouldn’t do a commercial for. But otherwise, I have carved a decent living out of being a commercial actor that has kept me from having to have a day job for the past 18 years. Knock on wood. If you had asked me coming out of UCLA if I was going to be doing mostly commercials to support myself, I would have either laughed at or slapped ya. And fortunately I belong to a theater company that I really enjoy working with where I get to do developed performance work that does bring me that genuine fulfillment you speaketh of. Of course, we aren’t doing theater 365 days a year, or even a third of that time, so those periods of fulfillment are spread out and thus I have to find other means of feeding my soul enough to stay afloat in these murky waters. I hike locally, backpack in the High Sierras, meditate, and for the last 5 years, chase my daughter around many a playground. I think to survive in Hollywood you need to have a balanced existence that includes many hobbies and activities, family-life, friends that exist away from work pursuits. Being a human first and an actor thereafter seems to work well for most in my eyes.

DK: About 25 years ago in Manhattan, Bob Duva (is that guy still around?) and I had a meeting in his fancy uptown office and he really belittled me for wanting to work in the theater. He insisted I had to make a choice, either theater or show-business. What’s the diff?

JR: Well, I think NY might be a little different in that regard as there are so many more theater opportunities. And paid ones. Here in LA, that’s just not the case. Equity-waiver theater here puts a whopping $15 a show in your coin purse. There are only a handful of Equity theaters and they are mostly filled with people that come with the production from NY or a household known actor. And here if you are doing a show it is really never frowned upon if you get a pro gig. Most productions have understudies and/or will cancel the show that night if one of the leads gets a gig… really, they do. So, yeah… I’ve never really had that be an issue. And while we’re on that subject, I must say that in recent years theater has become less and less a showcase for MP/TV casting opportunities. It’s really hard to get casting directors out to see shows as they are busy working on a job and have more than enough people to consider for them. The talent pool here is vast and endless. One must really stand out to get noticed in these parts. I recommend trying to act in Hollywood like I recommend riding a motorcycle in SoCal… it’s a thrill, but you might not survive and many don’t. And now, I’m too old to do anything else, and don’t have another skill set, so here I am pounding the pavement, doing the shuffle, trying to keep swimming in these choppy waters.

DK: What do you think about theater in Las Vegas?

JR: I think it’s truly wonderful and about time it starts to be taken seriously! It only makes sense that Vegas could and should have theater with a well-supported and respected presence. I think historically the opportunity for theater has been in the shadow of what happens on the Strip and for a long time that was dominated by variety shows and sexy revues. It’s like trying to do Swan Lake next to a nightclub. But I think Vegas has become big enough and thus cultured to the extents of it being able to appreciate theater. And I’m so psyched for A Public Fit and what you all are doing to contribute to the presence of truly quality theater in Vegas. More power to ya and I hope to join in on the fun for a production in the not-too-distant future. I wish you all the very best and I know that what I have witnessed happening is grounded in the desires and fruitful results of bringing thoughtful, passionate, resonating theater to the Vegas scene.

DK: What are you working on right now, and what are you hoping happens next for you?

JR: Just shot a commercial for Bridgestone Tires last week. Have an Audi spot currently airing— it’s the one about the race horse Secretariat and how his heart was twice the size of his competitors… not unlike the Audi engine, they propose. I play the vet that discovers Secretariat’s enormous heart… and I’m in the spot for about 2 seconds. But fortunately I was on a principle contract which means I get paid the same whether I was in the whole spot or just the 2 seconds that I am. Funny how these things work. Love the unions, folks. Otherwise, I’m auditioning often. It has been a purty slow year for MP/TV 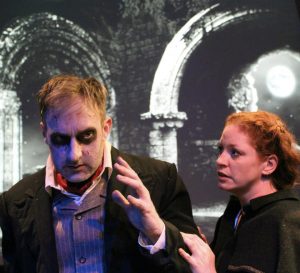 stuff thus far, but hopefully that will start picking up as series shows go into production in the early Fall. I’m also developing a pitch for a TV series with a couple well-positioned actor friends. I can’t elaborate much on that right now as we’re keeping the idea under wraps… but I will say that it is set in the high-desert (not necessarily Vegas, but perhaps). One must diversify in this town if you wanna make opportunities. My music, and writing endeavors have made me money and connections to people in the biz I would not have otherwise gotten just being an actor. So what I hope happens next is that I get this idea optioned and made into a pilot… with myself as creator, actor and on the writing staff. Shoot for the stars and you’ll land somewhere in that direction… or whatever Casey Kasem said.

DK: How is the acting business different when you have a family to take care of?

JR: Having my eyes focused in the directions of making money, I suppose. Before I had a family it was much more about doing fun work, doing more theater, being the part of a very active theater ensemble where I made no money (The Actor’s Gang that is). Now I know I need to pay bills. Fortunately my wife also works. She is a realtor and is doing quite well. So we’re a team in supporting the family and that’s about what it takes here in La La Land to maintain a reasonably comfortable existence. 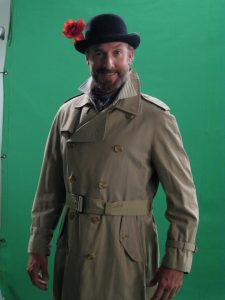 DK: What do you wish was going on in the theater world that is currently lacking, or conversely where do you think it’s strong?

JR: I wish there were more straight-up and dark comedies. Seems that it’s mostly musicals and revivals these days. And I get it— they are answering to the mighty $ and what people are going out to spend $100+ a seat on. And don’t get me wrong, I do like me some musicals— Book of Mormon was amazing. I’m going to see Hamilton when it comes here to the Pantages. But I wish there were more comedies like Neil Simon did … but original ones! It seems to be a dying breed. But then again, I’m not in NY, so maybe they have a life Off-Broadway. But I’d like to see some comedies break out into bigger realms… onto Broadway stages, touring and then having lives in smaller theaters. And I think it is getting stronger and more fun in the realms of musical theater. Out of the box shows like Book of Mormon and Hamilton are hopefully paving the way for more progressive, newly inventive forms for musicals. 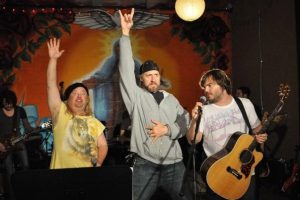