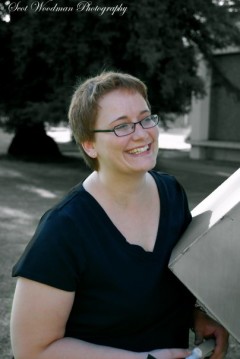 Brandi serves as Production Manager for A Public Fit Theatre Company (along with company manager duties) as well as working in Las Vegas as a freelance production stage manager for local theatre companies such as A Public Fit, Signature Productions, Second Star to the Right Productions, Baked Stage Entertainment, College of Southern Nevada, Nevada Conservatory Theatre and Jewish Repertory Theatre of Nevada. She also worked as a production assistant for America’s Got Talent – LIVE at the Palazzo. A sampling of her PSM credits in addition to most of APF’s Mainstage productions to-date include Machinal, A Midsummer Night’s Dream, Compleat Female Stage Beauty, The Producers and Equus. She has managed productions in a variety of venues that include found spaces, traditional proscenium theaters, intimate black box settings and large outdoor amphitheaters. Brandi’s undergraduate and graduate academic studies encompassed a wide variety of subjects including theatre history, entertainment & fine art law, management, design, and even physics and mathematics. Brandi’s family traveled a lot while she was growing up: she’s been kissed by a seal, experienced Alaskan mosquitoes (like dragonflies, really!), and owns a brick-sized piece of the Berlin wall that she broke off on her own. She is an avid reader and enjoys mentoring youth.