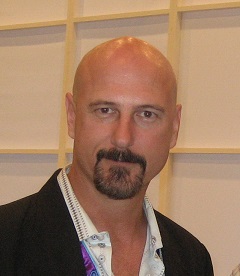 Joseph Kucan is a native Las Vegan and co-founder of A Public Fit. He has been involved in the local theatre community for the past 40 years, starting as a founding member of the award-winning Rainbow Company and later serving for 10 years as its Educational Director. His work in multi-media as the Senior Producing Director of Dramatic Assets for Electronic Arts helped him to stumble, dizzy and ill-prepared, into world-wide fame as the iconic villain “Kane” in the best-selling computer game “Command&Conquer.”

Kucan has directed a vast number of theatrical productions at a number of theatre companies. During his stint at Rainbow Company, shows directed by Kucan included Big River,Fools,The Incredible Jungle Journey of Fenda Maria and Puss in Boots as well as the world premiere productions of Weyland’s Sword,The Sugar House, Dog-Pound Boy and many, many others. Kucan also served on the staff of Directors for IceFire Performance Group in Stowe, VT directing Summer Stock seasons including the musicals Little Shop of Horrors, A Chorus Line and Fiddler on the Roof. As the Producing Director of Dramatic Assets for Electronic Arts/Westwood Studios, Kucan helmed the multi-million dollar computer game franchises Command&Conquer, Dune, C&C: Red Alert, Lands of Lore, The Legend of Kyrandia as well as Blade Runner, Pirates: the Legend of the Black Kat, NOX, and Monopoly CD-ROM, the world’s first mass-marketed computer game to be played over the internet. As a fight choreographer, Kucan has safely staged the violence for a number of productions including Macbeth, The Learned Ladies, Foxfinder, I’m Not Rappaport, Private Lives, Company, Moby Dick, Les Liaisons Dangereuses, West Side Story, and Cinders. In 2008, Kucan was awarded a Guinness World Record for “Longest Recurring Actor in a Videogame Franchise” for his recurring role as “Kane.”