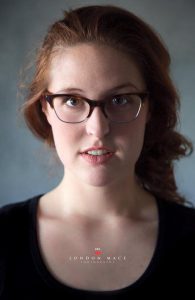 Jamie Ahlborn earned her BA in theater studies with a focus in acting from Emerson College in 2014. Starting in her high school theater program, Jamie immersed herself in every aspect of theater that she could and continued her overall passion for “the show” throughout college: acting, fight directing, building, directing and running many theatrical productions both in Boston as well as in Las Vegas. Since moving to Las Vegas in 2015, she has made a name for herself as a backstage manager, assistant stage manager and a set builder. Past credits both on and off stage include: The Secret Garden, The Scarlet Pimpernel and Fiddler on the Roof (Signature Productions); The Music Man, Legally Blonde: the Musical!, Shrek, Chitty Chitty Bang Bang, Tarzan and Lend Me a Tenor (Super Summer Theater); Beauty Queen of Leenane and W;t (A Public Fit). In her spare time, Jamie enjoys hiking, watching movies and playing with her quarterstaff.