Today’s guest blogger is David Adler. David does all the show art for APF and has been an integral and valued voice in our company for a long while. I’ve known David since we were about 10 years old. He’s a dear and valued friend. 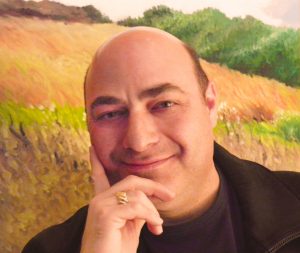 He’s an art director, designer, costume designer (Rainbow Company, UNLV, New West Theater, Actors Rep, Caesars Palace…) and has won a bunch of industry awards for some pretty big name entertainment and resort industries for his advertising and retail design. He’s lived in Vegas for like a bazillion years and has a one-of-a-kind insight into this town and its evolution.

I asked him about the idea that Vegas is an artistic wasteland, that there was no culture in Las Vegas. Here’s what he had to say.

Growing up, this was a superficial view I frequently heard from people arriving in Las Vegas. (No one ever said this in front of my parents, of course. Most people were far too polite. My parents were both noted classical musicians who had opted to live in this apparent cultural desert.) But worse yet, this view seemed to be the consensus from many people who already lived in Las Vegas.

When my parents first arrived in town, Las Vegas had no concert hall and the only theatre spaces were the showrooms on The Strip. (This was way back in the mid-sixties when cars burned leaded gas, you could get across town in fifteen minutes, and every musician in Vegas knew each other by their first names.) Back then Las Vegas must have looked every bit a cultural desert as it was a literal desert. But this again would just be a superficial view.

Artists have a need to create.

Artists – whether musicians, actors, writers, painters, sculptors or designers – are feisty creatures. They can’t sit still. If you leave them alone for too long, they’re bound to do something – draw, write, build or fill an empty space with sound and movement.

Well, Las Vegas had plenty of artists way back when. For example, the musicians – when they were not playing show tunes on The Strip – would gather together in each other’s homes and hold small classical concerts. Paul Harris had by that time, already established a growing theatre program at Nevada Southern University (now UNLV) with theatre productions inside a small room in Grant Hall. So by the time I came around, Las Vegas had already established a growing cultural community. (No culture. Indeed!) But the cultural desert idea persisted.

Actors, musicians and designers are all pretty self-sufficient people. In truth, they don’t really need you. (I don’t mean to be rude, but it’s true. They like you, but they don’t need you.) Despite what you hear about artistic egos, most artists find joy in the act of creating art and music. And because they’re such nice people, they are happy to share their creations with you. (See. I told you they like you.) And that’s where you come in. Well, you and lots of other people like you – the audience. Las Vegas audiences slowly sought out the plays, concerts and art exhibitions. Eventually the small recitals outgrew the living rooms and the plays needed bigger stages. Classical concerts were given in the showrooms at the Stardust Hotel and other resorts. (Classic music on the Las Vegas Strip! Really. I didn’t believe it myself until I saw the pictures of my parents on stage and their names on the marquee.) And by 1968 plans were being drawn up for a new theatre along Maryland Parkway and Cottage Grove Ave. The Judy Bayley Theater opened in 1972. Around that same time, the 7,500 seat Aladdin Theatre for the Performing Arts opened on the Las Vegas Strip. (Beautiful theatre. Terrible acoustics.) That opening was followed by the Artemus Ham Concert Hall at UNLV in 1976. Each of these facilities scheduled full seasons of locally produced theatre, ballet, and music as well as a long list of Broadway shows and international orchestras. With three professional-class venues and UNLV as the defacto cultural center of the city, Las Vegas could finally shed its image as a cultural wasteland!

What the heck will it take?

By the time I began performing and working in theatre, Las Vegas had added the Rainbow Company, a nationally recognized and award-winning children’s theatre, the award-winning Nevada Dance Company (now Nevada Ballet Theatre) and The Las Vegas Little Theatre regularly producing fantastic work. The Super Summer Theatre line-up of plays became a summertime staple. Still, I would hear people say, “There’s no real culture in Las Vegas.” Every time someone would malign my artistic community with that tired trope, I’d hop upon my rickety soapbox and shake my finger at them. (They all bit their tongues and kept silent. But I suspect that was just in the hope I’d stop talking.) But the same old idea kept repeating itself.

This cultural view of Las Vegas had even spread all the way to Europe! When John Napier, the Tony Award-winning designer of Cats and Les Miserables came to Las Vegas in 1990 to design and direct Siegfried & Roy’s new show at The Mirage, he spent three months living on the Las Vegas Strip. A few days before he left town, he accepted an invitation to speak to the UNLV Theatre Department. After touring the Black Box and the Judy Bayley Theatres, he looked around in amazement. “Why didn’t anyone tell me about this? These theatres are amazing! I’ve been here three months and nobody told me this was here!”

Yeah. Why didn’t anyone tell him?

Over the years I was fortunate to work for several theatres in town. And I can honestly say that the actors, directors and technical staff of each and every one of them were incredibly dedicated and professional people. They were not only talented artists and supportive of their own theatres, but also of the community. Most importantly, THEY PRODUCED GOOD WORK! The same was true as I watched the growth of the The Las Vegas Symphony, The Henderson Symphony Orchestra and the Las Vegas Philharmonic and more art studios and galleries than I could begin to count. Still, Las Vegas can never seem to shake the old trope that this is a cultural desert.

Today, Las Vegas is home to more than 20 working theatre companies, at least 7 dance companies, 9 classical symphonies and chamber orchestras, and dozens of jazz, pop, country, and rock bands. As a theatrical space or concert venue, The Smith Center is the equal of any cultural center in Chicago or Los Angeles. And I dare you to count up the number of art galleries and public art displays across town! (No. Really. I want to know. I couldn’t count them all.)

And yet, from time to time, I still hear people say, “There’s no real culture in Las Vegas.” Why is that?

I don’t think you can blame it on the Vegas Strip. If I’m going to be fair, the Las Vegas showrooms have had some of the best musicians around. The shows, while big and splashy, have some of the best singers and dancers in the world. (If you don’t believe me, just try dancing up a wall – sideways in a harness – twice a night!) And the productions boast the most incredible scenic, costume, and lighting design of anyplace on Earth. New York is now trying to compete with Vegas. Just take a look at the new Frozen musical on Broadway.

It’s all about you.

So why then do some people like to say Las Vegas has no culture? Perhaps it gives them an excuse for not looking…or thinking. Artistic culture requires active engagement and thought. You make a decision to leave your house and see something new. As an audience looking at a painting, listening to a concert or watching a play – you are an active participant. You are deciding if you agree with the actors on stage; feel touched by the music or just like the painting.

You make the choice to be part of the culture. And once you’ve seen it, you know it’s there.

What do you think? Am I taking out of my bottom? (Maybe. It wouldn’t be the first time.) Do you think there’s no real culture in Las Vegas? If so…Why?

Theater and The Strip; Like Ships Passing in the Night “Existentialism is a philosophy that emphasizes individual existence, freedom...
Scroll to top