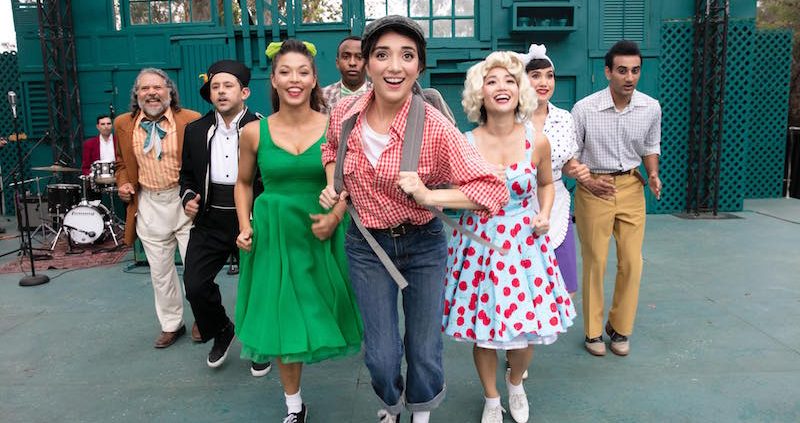 This weekend, I went to two separate events in Los Angeles that were linked in a way that I hadn’t anticipated.

The first was a production by Independent Shakespeare of Two Gentlemen of Verona at Griffith Park. Shakespeare in the park is a dicey proposition under any circumstances. (Personally, I’ve done many “Free Shakespeare in the Park” productions, ranging from insanely good to utterly, tragically, comically bad. So I understand completely the inherent obstacles therein.) And Independent Shakespeare, despite their near perfect venue, is about as hit-or-miss as they come. Two Gentlemen is problematic as well: all those simplistic two-person scenes full of rhetorical humor, the anti-Semitism, the sexism and downright rapey apologism.

In this production, they did a 50’s style rock and roll overlay that was sweet in its way. There was a power quartet on stage the whole time, drums, vocals, lead guitar, and base, with some characters stepping in and out of the band to play scenes. I appreciate all the pompadours and poodle skirts and hip gyrations and the cutesy wide eyed faces that hearkened back to a “simpler moment in America.”

But the whole time there was something else at play that bothered me and I didn’t understand it until the following night, which leads me to the second thing I saw this weekend.

The second thing I saw this weekend was Pat Benatar at the Greek and she blew the doors off the place. Here’s this 64 year old woman that comes strutting down the deck rocking shiny black stretch pants and still able to effortlessly glide between a whisky growl and sudden, soprano explosiveness. And within moments of her plaintive wail, “We’ve got the right to be angry, what are we running for?” I got it.

I’ve often said that the modern theater needs more rock and roll. I don’t mean the music, although that’s fine too, I mean the spirit, the guts. To my mind, the spirit of rock and roll, the rebelliousness, the anger and frustration with the betrayal of our world leaders, the pissed-off, never-surrender, fuck-you-and-your-expectations-of-what-I’m-supposed-to-be, the out-of-your-seat elation and electrical thrill of sexual freedom that floods the arena shows and gut-pounding bar gigs goes hand in hand with live storytelling. Don’t get me wrong, I like intellectual theater as much as the next guy, but it so often misses the undercurrent of subversiveness that has made the theater not just important, but compulsory.

Likewise, both the theater and rock and roll used to be professions of the outsiders and the impoverished. They were a kind of church for all the losers and rejects and gender deacons and night-carnival scenesters, the dope fiends and black sheep and don’t-tell-your-mother-or-I’ll-give-you-a-smack broken wing superfreaks.

Ozzy Osborne was the son of broke-ass factory laborers; Eazy-E sold drugs on the streets of Compton. Boy George changed the way we view gender by doing nothing more complicated than wearing a dang dress, which at the time, could land you in the hospital.

But lately, both the theater and the music scene have become the hideouts of the secretly wealthy. They are no longer sacred callings; they are hobbies for the fucking rich kids. Taylor Swift, talented as she is, is the daughter of wealthy oligarchs, an NYU theater degree will set you back about a hundred K. What exactly would motivate these folks to tear into the soft flesh of the status quo when the status quo has been treating them just fine, thank you very much?

Maybe that’s it. Maybe I just need a backbeat of post-world war II English anger in my productions of The Goat, maybe I’m missing the pink-haired, punk rock snarl in the subtext of Hot L Baltimore. And it should be there. Once upon a time theater WAS rock and roll. Make no mistake, theater WAS the raised middle finger to the patriarchs and indoctrinated economic gatekeepers.

It’s all saying the same thing: rock and roll and the theater are way more alike than they are different, but a hundred years ago the theater became the refuge of septuagenarians and turtleneck wearing intellectuals who read Opera World as they vape, the pages carefully turned outward to make sure you can see them as you pass by him at the Starbucks.

The Two Gentlemen I saw understood this, but they misfired. Their cocksure cast of diverse and attractive millennials was charming to be sure, but they no more understood the volcanic rock and roll fire than did their audience of picnicking suburban voters (and these are the folks that need it most.) They sang all the songs and did the dances, they preened and posed and gave Shakespeare a 4/4 beat (unsyncopated…) that was likable enough, but it felt like none of them has ever lived the blues enough to sing ‘em right. And moreso, they didn’t even know that it was required. They all figured, not unlike Jonathon Larson, sing sweetly and hit the power notes; boom, done. Tony.

Pat Benatar got it. Pat Benatar shrieked it out with the passion and experience that only a scarred-but-smarter chick can. And, sure, it’s easy to look back at the 80’s with a superior tilt of our ironic glasses and smirk at the over-the-top bombast of the music, in particular the punk and heavy metal sub genres. That music was written when Reagan was god, when they told us that greed was good, when the Moral Majority laid the foundations that would later make a blowjob an impeachable offense. It was then that Corey Hart told us to never surrender, when Robert Smith said that tonight was for dancing like you can’t hear the beat, Queensryche released Operation: Mindcrime, and Grandmaster Flash wrote about rats in the front room, roaches in the back, junkies in the alley with a baseball bat.

That’s the rock and roll that the modern theater needs; not the glib whitewashing and gentrification of the stuff our parents said would make us all Satan worshipers; it needs the fractious anger that seethes within Public Enemy when they say: “our freedom of speech is freedom or death.”

Our freedom of speech is freedom or death. There are Nazis in the white house; banks are writing the laws. The ocean is damn near sterile.

Now is not the time to let rock and roll become just another design element the theater has softened so much that it becomes palatable to the silk-skinned folks who are flush enough to afford the tickets. Even if our younger performers don’t get it, one of our priorities should be to keep that fire scorching.

Pat Benatar inspired me two nights ago; she rocked my shit as hard as the first time I saw Eric Bogosian or Eve Ensler or that time I was hammered and lost my breath when Julie Taymor’s 30 foot tall Bread and Puppets masterpieces took over downtown Manhattan on my first Halloween in the city circa 1989.

But Pat did it two nights ago. Not four decades ago, she did it on a sultry Sunday night at the ferocious age of 64. So maybe her righteous anger never died, maybe people just stopped paying attention. (There is certainly another blog here about ageism and its straight line correlation to sexism. I aint got time for that right now because Love is a Battlefield.)

But if Pat Benatar can do it after four decades of smashing the spandex ceiling, if she can still muster the meteoric howl of emancipation and anger and revolution, then those of us still making theater have no excuse.